I got these plastic models done. As I think I mentioned previously, they are from AliExpress. They are not specifically 1/600, but they are close enough 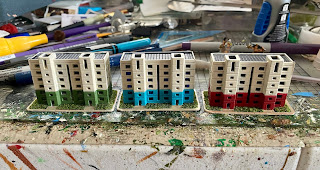 I painted them in a color scheme that I saw on several visits to China. They tend to paint the bottom-third of many buildings a different color from the rest of the building. I did three colors that didn't look overly flashy. I thought about giving them a wash, but decided they looked ok without. There was nothing behind the windows, so I took some black construction paper and glued it to the inside walls. Their bases are cut from styrene For Sale signs, painted and flocked. In China, you would see rows and rows of these buildings. I think for my purposes, three are enough.
Posted by Chris at 12:50 PM No comments:

Ennui: a feeling of weariness and dissatisfaction; boredom.

Robert Cordrey wrote about it on his blog a few weeks ago. I've read other bloggers discussing similar issues. For me, I though way back in March that I'd have lots of time for projects, and dare I say it, actual gaming. It seems, however, that the situation has magnified what I have been feeling for a while regarding my hobby. I paint a lot of stuff, make terrain, but never actually play a game. This came to a head the last two weeks. I mentioned back in April and early May that I have been making a lot of progress and multitasking. Things were chugging along. But then, I got caught up in a painting contest on a Facebook groups page. I started working on my entry, a unit of fantasy heavy cavalry. The more I worked on it, the more burned out I got on it. I wanted to make it as high quality a paint job as I could. It seemed endless tedium. I wanted to shelf the whole thing and forget about it, but at the same time, I just wanted to finish the damn thing. Finally, I finished last night. I took some pictures and posted them on the group site that is having the contest. I don't pretend to a great miniature photographer and I really don't have to time nor the wherewithal to take great shots. When I looked at the pictures (see below), I thought, "I spent all this *bleepity-bleep* time working on these things but the pictures don't show most of the detail I put into them!!!"

So, here's some pictures I took of very recent miniatures that I painted. I think these are going to be the last ones I paint for awhile. For now on, I'm going to redirect my efforts to playing games, even if they are board games.

First, a couple of dwarves from Battle Valor Games: 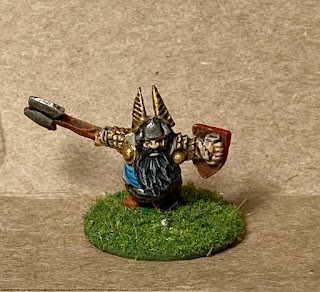 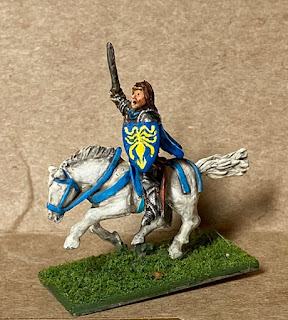 Queen Keona is a kitbash. Originally, she was a Battle Valor vampire general. She looked perfect from the photos, and it would be easy to swap shields. However, when I got her, the upper torso was fine and the horse she rode on was fine, but her waist, legs and feet left something to be desired. It was mainly her foot attire. It looked like she was wearing Inuit mucklucks. I've worn them. Great for sub-zero temperatures and snow, silly for riding into battle. Unfortunately, Battle Valor's riders have their lower halves sculpted directly onto to the stead. So, there was no way I could get rid of the legs and use the horse. Fortunately, the proportions and size matched fairly well with Essex 15s. Some poor knight in full plate mail gave his life....legs for the queen. I used one of the many Essex horses I have accumulated over the years. Threw on a standard heater shield and there you go. 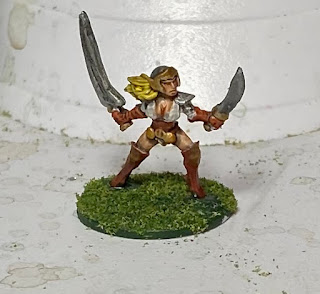 The objects of my scorn, Battle Valor evil heavy cavalry: 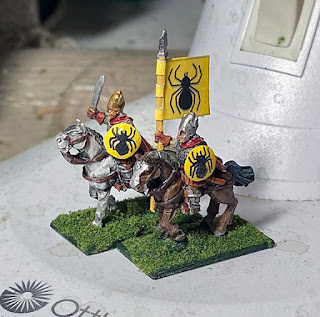 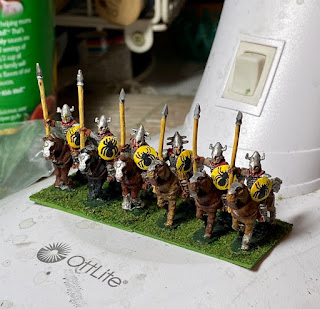 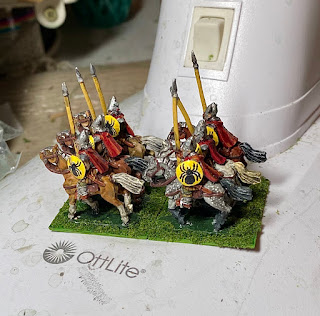 Finally, an impromptu battle scene that includes some Goth slingers from Essex along with the spider warrior that I painted a couple of weeks ago: 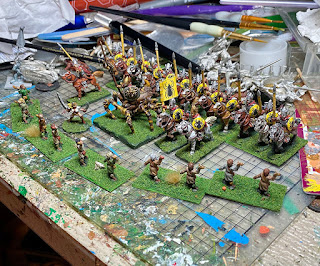 They are supposed to be Battle Valor's version of dark elves, but you really cannot tell except some of them have pointed ears if you look close enough. The spiders on the shield were done with Sharpies. The flag was done using Adobe Illustrator.

Its time to box these, like I do so many others, clean off my workbench, start gaming.

Yesterday, I made an all out cleaning assault on my pigsty of a workbench. Despite about three hours of work, I didn't get really far, plus all the dust I kicked up made my allergies a nightmare. Under the piles of junk, I found a lone, primed, Saracen APC and a ZU-23-2 23 mm autocannon with two gunners on it. It might have a carriage for it, or it might go onto another vehicle. The APC is an old Skytrex model and the autocannon belongs to H&R. Inspiration struck! So... shaving off the MG turret, pulling out the pin vise and drilling out a hole for the gun, I now have a Saracen with a ZU-23-2 AA autocannon on top. 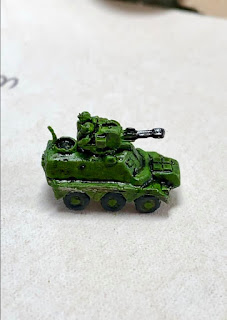 I think it took me all of 20 minutes to complete, including waiting for the paint to dry. The thing looks incredibly top heavy and kind of silly, but I've seen some jury-rigged technicals that looked a lot more ridiculous. One more weapon to add to the Federal Republic of Gambusia's arsenal.
Posted by Chris at 4:59 PM No comments:

What little time I have in the evening, I've been multitasking like crazy. In addition to experimenting and/or building lots of scenery for 3mm (making cultivated fields has become my new nemesis/obsession), I have been trying to paint down the 15mm fantasy lead pile. Below is the latest fruit of my labors. I think I spent a total of about 8 hours on this one over several days. 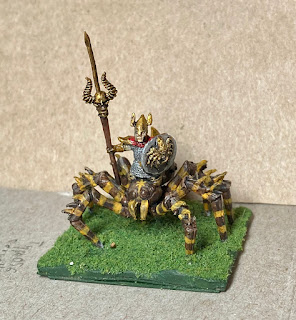 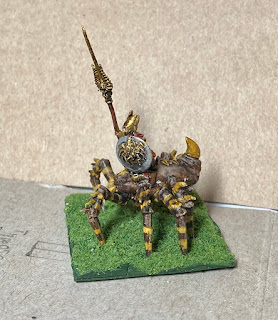 He is a general from Battle Valor Games.
Posted by Chris at 2:26 PM No comments:

Back in early January, I stumbled across a bunch of modelling supplies on AliExpress. AliExpress is an online shopping site in China that I guess is connected to Alibaba, though I am really not clear why or how they are different. They are both Chinese versions of Amazon.com, but everything comes directly from the manufacturer. Two other differences from Amazon.com are that they don't seem to sell books and it takes FOREVER for the stuff to get here. The first time I ordered from AliExpress, which was some dice, it took almost a year for them to ship. This time, it was about three months. And regarding what they sell, if you don't know, or are too young to remember, Amazon.com started off selling books before they got into everything else.
I had the fear in the back of my mind that the packages were dripping with Corona virus. I'm going to assume that they are not contaminated, or if there were any virus particles on them, they did not survive the trip. I sprayed everything with some disinfectant anyway.

I got these buildings. They didn't have a scale assigned to them, but the dimensions seemed like they were roughly 1/600. I ordered a few just to see what they looked like. I have yet to paint them. You be the judge. 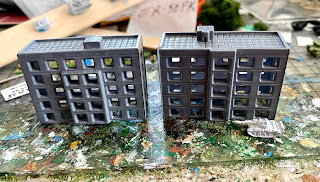 These two appear to be small office buildings. They don't seem to have entry ways. The windows on the ground floor almost touch the ground. I assume the small structure on the roof is a stair access. 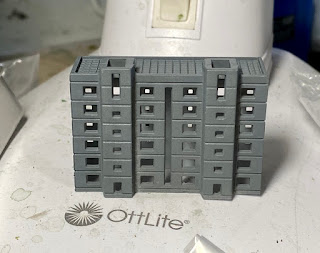 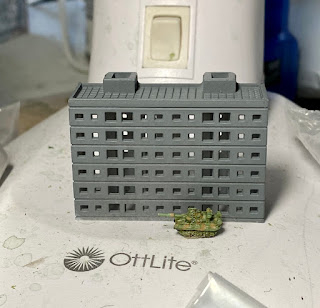 I bought three of these. They look a lot like large Soviet style, high rise apartment blocks. These apartment complexes are still very much around today throughout cities in China. Many of my in-laws live in such buildings. Like the previous buildings, there doesn't seem to be any doors. At first, I thought the two towers might be for elevators, but they have windows. I might make them into elevator shafts by covering over the windows. I'm not all that certain which is the front and which is the back.

They are very stylistic, and that is OK. I'm going to leave the windows they way they are rather than put clear plastic behind them, or maybe glue black paper behind them. I might buy some more, if I can find them on AliExpress again. UPDATE: Here is the link, and they cost about US$3.00 excluding shipping.
Posted by Chris at 4:03 PM No comments:

I can't say I've been living the life of ease since the stay-at-home "strong suggestion" here in Tennessee. Most of my time has been going back and forth between homeschooling the boy, my own online teaching, and dealing with the back and forth tension between TigerMom and "where do you thing she gets that from" strong-willed daughter. Despite all this, I've been working like a fiend, mostly 3mm stuff. Here are some of the fruits of my labor: 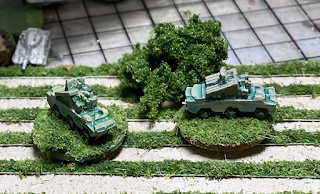 9K33 OSA also known in the West as the Gecko. Its a big SAM system mounted on a really big truck thing. Even though it is Russian in origin, Lavonia ordered a bunch of them for evaluation. 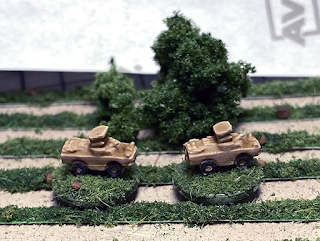 BRDM-2 with Sagger ATGM. Bovatopia has a lot of somewhat obsolete weapons, but so do most of the threats they face. T-55 MBT. The Pico Armor site now sells the one of the right, which is a more updated model, according to Marcin who is the owner of O8. However, there seems to be a lot of the older style models still in stock, which is what you see on the left. This is Bovatopia's primary MBT, at least until more modern Chinese MBTs come on line. I kind of like the older model.

Above is a number of models painted up. In addition to the T-55s and the BRDM-2s, I have some BTR-40s, what I think are BTR-80s, and some AMX-13 light tanks. Early on in the struggle for Bovatopian independence, they managed to score a bunch of these light tanks. Like a lot of my fictional nations, obsolete weaponry are never junked. 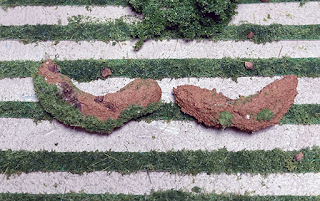 Last but not least, I made up some terrain. Above are dug-in markers that I made while I was making the bunkers for the SA-2 SAM. They are made the same with aluminum foil wrapped in polymer clay, then flocked.

I am writing up another post related to campaign thoughts, but I'm throwing this discovery up on a massive game using the old Chainmail rules. It takes me back when I used them in high school

Mostly a lot of great pictures with out much commentary. If you are gamer of a certain age, see if you can spot how many classic Ral Partha fantasy and historical 25mm figures are in the game.