The end of the semester is always crazy for me. I am wrapping up school, but seems like my kids' activities have tripled. I have been doing a lot of painting, but I don't have time to sit down and record things on my blog.

I've been working really hard to complete these fantasy figures, but I think I reached burn-out on them, and want to get back to the microarmor universe. I started a little fantasy, side project. My son Ivan has a number of invisible friends. Don't worry, he knows they are pretend. When he has a hard time going to sleep, I tell him these stories about the adventures of King Ivan and his knight friends. The stories are pretty bad, but I try to inject some sort of moral to the story. He's been goofing around with my figures and having little battles involving King Ivan's army versus the evil Red Wizard and his army of ninjas. So, I thought I would paint up some of the characters. I'm far from finished. Here is King Ivan's standard bearer: 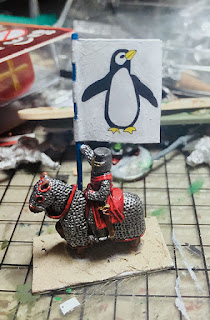 I can't remember off the top of my head who makes this guy other than its an Italian company. My son loves penguins and wanted the king's coat-of-arms to be a penguin. I've got a trumpeter also finished and I'm still working on the king and the evil red wizard. I used to be pretty good at painting coats-of-arms onto shields and such, but my eye sight was a lot better and my hands were less shaky than now. I have some ninjas on order and once I get them and paint them up, I will take a break from the 15mm fantasy for awhile and get back to moderns.
Posted by Chris at 2:42 PM