Many, many years ago (late 1980s), I did mini-campaign for my fictional WWII world that pitted the Soviet Union against the UK for a race to take over Iran for its oil resources. It used mainly early war tanks and equipment. I altered the geography such that there was more seaway. That allowed for some naval battles to be fought. I had a map, but its long gone. Also, having read The Great Pacific War by Hector Bywater, my brain got all going to recreate that Iran campaign though set even earlier, and expand it geographically include other foreign nations. I have been slowly building up fleets in 1/6000 scale.

So, I started buying a bunch of 1/600 aircraft for the air combat portion of it. These guys are from Tumbling Dice Miniatures

The biplanes were a major pain in the arse to put together. Plus, I only got three fuselages for the Hs 123s. I did get the upper wing and even two sets of landing gear, but not the rest of the fourth plane.
I also got the Martin B-10 bomber. I've always like slightly archaic weapons and the B-10 especially. I need to figure out what rules to use. I might use Wings at War Battle of Britain rules and make up the stats. I might even try Bag the Hun. Jim over at his Jim's Wargames Workbench has a lot of variants for these rules and I might crib some of his stats for the rules. Unlike my modern air gaming, I am less interested in detailed aircraft stats.
Posted by Chris at 10:24 AM 3 comments:

I finally got the statue of the lizard deity finished. Time to pack it all up and send to my friend. I had planned to make it much more "jungley" by putting a lot more plants around, but I didn't want to obscure some of the details on the sides of the base. Plus, I was starting to get burned out on making it and just wanted it finished. 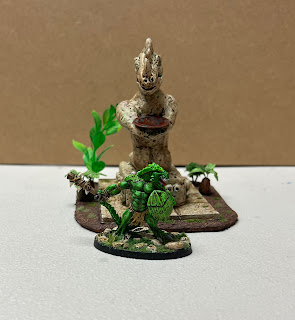 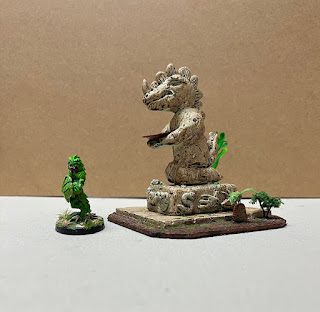 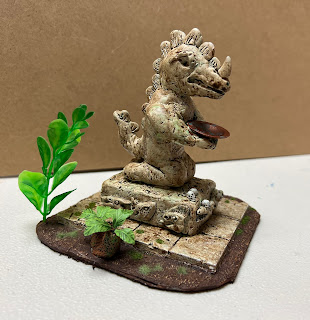 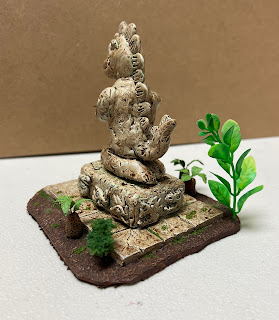 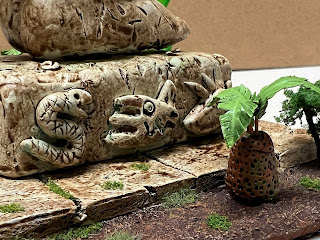 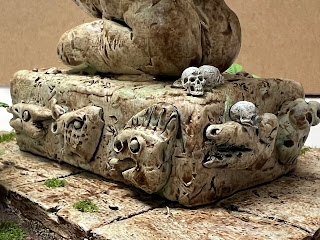 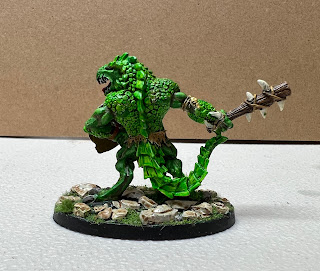 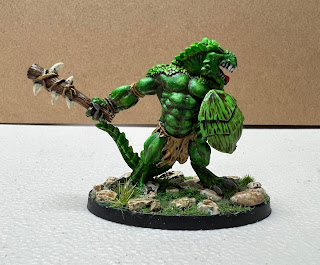 I enjoyed making the statue and I learned a lot, but I think I need a break. It was very time consuming and as I said above, I was getting rather burned out. Hopefully for the next challenge, we will just stick to miniatures.
Posted by Chris at 9:46 AM 2 comments:

I am moving along on my part of the challenge. I hope to be done this week. I leave Saturday or Sunday (weather permitting) for the beautiful state of Kansas and I won't be back until them following Saturday or Sunday (weather permitting). It's a road trip to visit some natural history museums and to hopefully visit some friends that are still out there. Renting a car is a LOT cheaper then flying and then renting a car. I hope the bean counters at my college appreciate this. Other than the weather, I am somewhat apprehensive about the drive. I used to do this sort of long distance thing (about 13 hours), but that was when I was young. Anyways, I want to wrap this project up and send it to my friend. 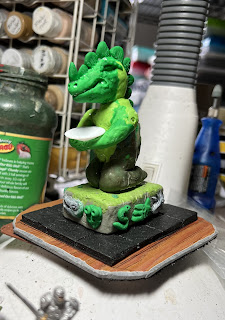 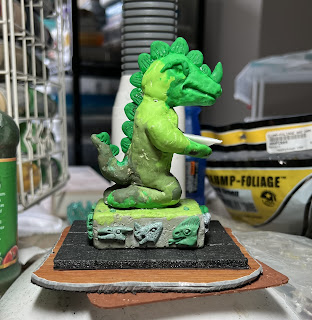 As I said in part 2, there needs to be some sort of scenic piece to go with the figurine. I decided on a statue of some Lizardman deity. My sculpting abilities are crap and it shows, but I figure that monumental sculpture is not a hallmark of Lizardman culture.

Most of it is made of polymer clay that is slathered over the an aluminum foil armature for the statue and a block of wood for the pedestal. Most of the bas-relief lizard heads were also sculpted from polymer clay, but for a couple of them, I experimented with Green Stuff. The whole thing rests on some foam core board where I removed one side of the paper. That in turn sits on top of a base made of a scrap of vinyl flooring from our first, pre-flood floor. We have lots of that in our garage. With the except of the pedestal to the foam core, everything is glued to each other with E6000 glue. Its strong but it would have melted the foam board. As of right now, I am at the stage where I need to put some ground cover on the base, paint and then add some sort of foliage. Since this is the first time I'm making something like this, I am not going to make it overly ruin-like. I'm heading to Walmart today to pick up a prescription and might see if there are some cheap aquarium plants to use. We had some plants from an old aquarium but when I picked it up, they fell apart.

Stay tuned for the final installment!

I got a package at my door and I was expecting it to be my mother's annual chocolate Easter bunnies for the kids. Instead, it was my friend Chris' entry. While I have been slowly moving along on my lizardman, he got his done. Here is some quick pictures right out of the box. 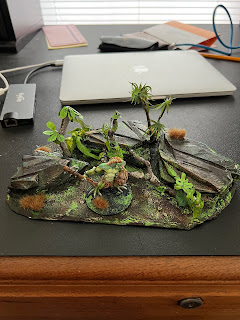 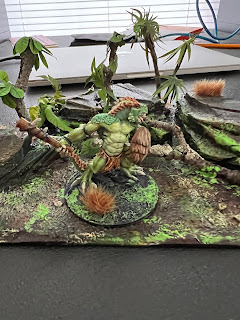 Well done! Spurs me on to complete my diorama.

Here he (she?) is. Turned out better than I thought it would. The figure's base had flagstone-like rocks sculpted into it, so I extended that theme onto the larger base using rocks made out of polymer clay. 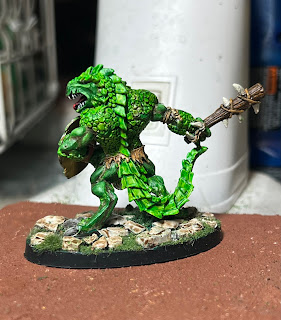 Now, the challenge is not over! We decided to add some sort of terrain to go with the figure. I'm not sure what Chris is going to make, but I am thinking along the lines of some sort of totem/alter. I've been looking at various examples from the Warhammer universe for inspiration.

Today, my daughter and I had a quick test game of Fast Attack Boats: a Game of the Arab-Israeli Naval War-1973. It was published in 1980 by Yaquinto Publications. This is one of their record album games. The album opens up and you have the hex board in front of you. Its compact, but once you punch out the counters storage of them is a problem. Unless you hope they don't fall out of the record jacket (I can't believe I still remember such terms), any sort of ziplock bag or envelope is going to make the jacket bend and eventually warp. This is would be a bad thing considering that the jacket is your game board.

The rules are pretty simple: move, shoot, launch missiles or torpedos, repeat. It is simpler than Sea Strike, but at the same time, its less generic. There is no detection or lock on. The only bookkeeping was to track damage. Small counters representing missiles and torpedoes avoid the need to keep track of those. There are differences between Israeli SSMs and Soviet missiles that the Egyptians and Syrians use. Ships have differences as well. Torpedoes seem worthless, but I'm sure in the right hands could make a difference. The odd thing is that missiles and torpedoes are extremely maneuverable. It is particularly weird with the torpedoes, unless wire-guided ones were common back then. The restrictions for what direction to launch your missiles or torpedoes didn't seem to matter because of this. It didn't specify in the rules, but we made up a rule that missiles and torpedoes need a designated target just like gun fire. What probably compensates for the high maneuverability is that a missile or torpedo can get to your target and still roll a miss. Damage is similar to a lot of other modern rules where there are no damage points. Instead, a ship racks up percentages of damage that accumulate. Over 40% weapon systems and propulsion start become to become an issue. Torpedo boats are an exception, they are pretty much toast if hit. There is a rule for ramming, but we didn't get to try them. There is a campaign system included.

The game lasted all of a half an hour, tops. My daughter had two Israeli missile boats that had a combined 14 Gabriel missiles! I took the Syrians with two Komar-class missile boats and four torpedo boats. Not only did they have far fewer missiles, but could only fire one at a time as opposed to two at a time. It was pretty one sided. I did manage to slightly damage one of her ships, but she leisurely sank all of mine. all my torpedo boats valiantly managed to launch their torpedoes before turning to dust by missiles. Only one torpedo managed to make it to a target but missed due to poor dice rolls. My last missile boat tried to escape, but it got beaten down enough were it was moving at only half speed. I then decided to try to ram one of her ships, but she finished me off with missiles to spare.

I liked it in spite of a few quirks. I think it lends itself to some tinkering to beef it up and include more ships. As always, I am looking for rules and ideas to be used for my ImagiNation wars.

My friend and I decided to do another challenge. We decided we were done with Dwarves for awhile and wanted to do something different. This time its lizardmen. I just got my order from Reaper Minis in the mail so this is an unboxing as they call it out there. 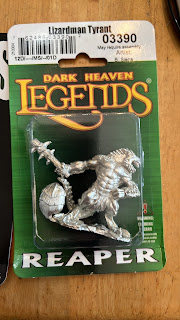 It was very difficult to choose. Reaper has pretty big variety of Lizard folk, including Dragonmen. We weren't really sure what the difference is between Lizardmen and Dragonmen. The only thing I could tell is that Dragonmen have tinier heads and longer necks, as well as more armor. This guy seems pretty cool plus he has a shield that looks like its made out of scales or scutes. 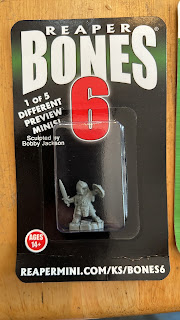 As a freebie, I got this Reaper Bones Hobbit (?). Usually, they throw in a mystery paint bottle. Maybe this is a promotional item. I won't complain.

I couldn't resist ordering some paints. I'm really putting the love on Reaper's paints. They are very smooth and cover well. I have been disappointed with Vallejo paints the year or so. I kept getting ones that don't seem to dry no matter how long I shake them, or they "dry" very shiny. Army Painter paints are not bad, but tend to be a little on the thick side. Citadel paints are nice, but rather expensive. Plus it seems they are making a whole bunch of specialty paints whose colors I would prefer in their base line.
I'm pretty excited to start this new challenge. I already know the colors that I am going to use to paint it. It should be a good one! 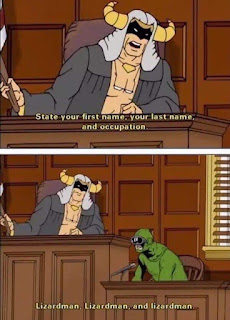