It is finals time at my college, and with the pandemic, it has been very chaotic. My "boss" the department chair, who was in the army for about six years says I am suffering from combat fatigue. Not to sound whiny, but the administration is so worried about the students' mental health...faculty, not so much. There's been nights where I'm up until midnight or so grading and there's been nights where after my parental chores, I say, "to hell with it!" and call it a night. On some of those nights, I've been doing a lot of painting. I seemed to have swung the pendulum back to fantasy figures. Maybe it was due to the painting challenge I had with an old college friend, or maybe it's just more relaxing to paint an warrior than a tiny AFV. Also, my focus has been on painting things so that my son can I can game. Little by little, he seems to be more interested.

These are probably the fastest figures I've painted. Splintered Light rock trolls. I got them as part of a Kickstarter. I had no clue how I wanted to approach them, so I painted them gray and that was that. Maybe took about 20 minutes, if you don't count waiting for the wash and the the spray coat to dry, and then overnight to let the flock dry. 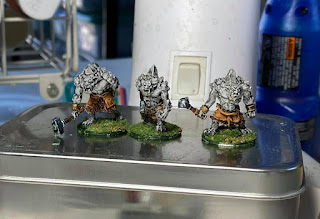