Happy Father's Day to all of you are out there who are fathers, grandfathers, biologically, and even those in spirit!

Gifts from my daughter: 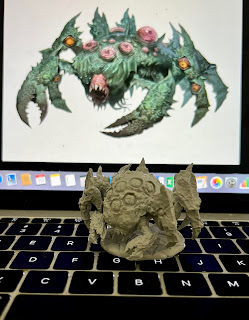 A Brain Collector from Wizkids Pathfinder plastic minis. Comes with clear plastic domes that cover the brains. I have to figure out what glue to use for them. 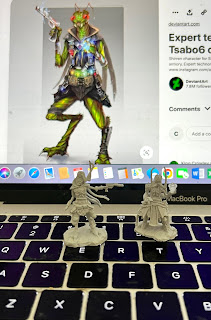 Shirren Technomancers also from Wizkids. This is from their relatively new rpg Starfinder. Starfinder using the same game mechanics as Pathfinder. I played a demo game at Will's game shop a few weeks back. It was a lot of fun. Technomancers are sci-fi magic users.

FYI, Wizkids makes several lines of plastic, pre-primed miniatures for D&D as well as the above. They are similar to the plastic ones that Reaper Minis makes (Reaper Bones series). It seems like they use a different plastic that is a little more flexible than that of Reaper. They also coat their figures with a primer whereas Reaper claims adding a primer to theirs is not necessary. I think the Wizkids has a little more detail to theirs compared to the Reapers, at least with the earlier Reaper Bones series, which were plastic versions of their metal figures. The Wizkids tend to be proportionally slimmer than those of Reaper. and slightly shorter. That being said, I have yet to decide which brand of plastic miniatures I like. The Reaper ones seem to paint up a little faster. I still have several Wizkids D&D figures that I am trying to finish. It is almost as if they have too much detail (is that possible?) and it has been somewhat frustrating.

It is funny, but the packaging does not indicate what the scale of these are. I will have to look on an unopened Reapers package to see if it is still listed.