In my last post, I grumbled about rebasing. Going thought my collection of fantasy and medieval 15mm figures, some seemed rather awkwardly based in their present state. These were rank-and-file troops that had overly dynamic, action poses. There was a unit of spearmen that seemed wildly swinging (I'm exaggerating here a little) their spears. Based on 15mm deep stands, there were a number of them that risked poking the eyes out of their comrades in the next rank. So, I decided to rebase this unit onto single stands. I can used them for rules that require figures to be on single stands, my skirmish like battles with my son, or for sieges where individual figures would be more appropriate for climbing up ladders or defending the walls. 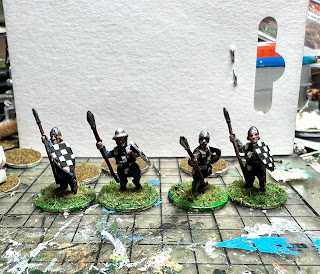