What I Have Been Doing During My Holiday Break

My last post was on December 10th and it was to show off the latest fantasy painting challenge. Despite my lack of postings, I have been very busy. In a pathetic attempt to clean and organize the hobby space, I noticed that I have a lot of left over figures. These are figures that remained after I had based them in units. For example, I use 24 figures (six stands with four figures per stand) for a unit of close infantry. Depending of the manufacturer, I might have 4 to 6 extra figures left over.  In some cases, I found packages of figures that I have no idea why I bought them. I found two packs of Essex Greek peltasts. So, I have been painting these extra figures and then mounting them on single stands. I have capitulated and decided that in addition to being used for games with my son, I would use the single stand figures for playing Lion/Dragon Rampant or any other rule system that insists on single-stand figures.

My family and I made our annual trip to Chicago to visit my family for Christmas. The subzero weather really forced us to hunker down. My daughter and I did go into downtown Chicago. Normally, we visit some museum or other cultural venue, but she just wanted to visit all the upscale stores that line north Michigan Avenue. Other than that excursion, we all sat at my mother's house doing not much of anything besides some baking.

I had planned to run a D&D game, but no one was all that interested. Even though no game was played, I did get this from my daughter for Christmas: 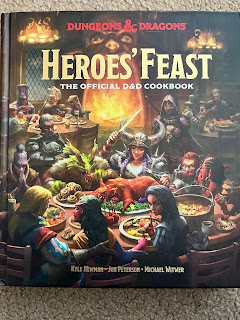 The recipes are pretty basic but the stories that accompany them are pretty entertaining.